The song says it all. The idea that the oil business will simply wait out the current crisis and simply pop up like a punching clown is a silly idea. The oil business is down for the count.
Road to Hell – Chris Rea

Can we talk? Rigs are going to be cannibalized, scraped and hands who were making good money and suddenly lost their jobs and what they thought was their lifelong career will find something else to do…and they won’t be back. A whole new generation of oil workers will have to be trained sometime in the future. I suspect that future will outlive me. From 1981 through 2001 – 20 years the business languished. And it’s glory days lasted less than 15 years – barely 10 for natural gas, which at the end of October hit a low not seen in this century. $2.

I couldn’t sell deals in 1991 because natural gas was $2 an MCF. How could you possible pedal a deal today at that price? You can’t. It is impossible. So at age 65 I anticipate ending my career as a penny ante mineral appraiser and there is very little chance I will sell another deal in my lifetime. The notion that nat gas was simply a mining proposition and the bottom line bucks meant nothing has been proven very wrong indeed. How many millions of dollars in drilling rigs, mudlogging and well logging equipment, fishing tools, pipe, welders, frack tanks, etc. will be idled and probably sold for 10¢ on the dollar? Shades of the mid-1980s.

The worst is yet to come. Next spring dozens of gas companies will disappear. Tens of thousands of geologists, engineers and roughnecks, pipeliners, and their oil patch brethren and sister, will be looking for work.

And that sets us up for the eventual shortage of gas, the inevitable spike in gas prices, and the ramping up, once again of drilling…but that will be years down the road. Meanwhile, alternative fuels cannot compete, and buyers will snap up the biggest gas guzzling SUV they can find. Sad but true. So call in the buzzards. 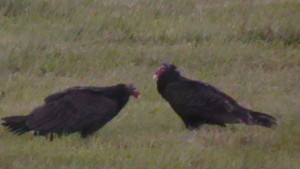 Call in the Buzzards for Me