From the Arkansas Geological Commission

Lithium (Li) is the lightest of all the metals, having an atomic weight of 6.939 and a specific gravity of 0.534. The mineral spodumene (LiAlSi2O6), which is often present in extremely coarse-grained igneous rocks called pegmatites, is the most important commercial ore mineral of lithium. In the 1960’s, with the discovery of lithium in brines and in arid evaporative lakes and lake deposits (evaporites), new commercial sources of lithium became available. Lithium occurs in significant amounts in geothermal waters, oil-well brines, and as a trace element in a variety of rocks.

The 3 lithium minerals that exist in Arkansas occur in the Ouachita Mountains. Cookeite (LiAl4(Si3Al)O10(OH)8) is in small hydrothermal quartz veins, most commonly filling fractures in the Jackfork Sandstone (Pennsylvanian) from Pulaski County westward through Saline and into Perry County. Taeniolite (KLiMg2 Si4O10F2) is present in smoky quartz veins in the recrystallized novaculite adjacent to the Magnet Cove intrusion (Cretaceous), Hot Spring County, and in a chalcedony-fluorite-pyrite vein in the “V” intrusive (Cretaceous age igneous dikes), Garland County. Lithiophorite ((Al, Li)Mn4+O2 (OH)) has been reported in the manganese deposits in Polk and Montgomery Counties, and as a late secondary mineral in quartz veins from many localities in the Ouachita Mountains. None of these minerals are considered economical sources of lithium.

The bromine-rich brines from wells in the Upper Jurassic Smackover Formation of Columbia County in southwestern Arkansas contain as much as 445 parts per million lithium. Lower values are reported in waters originating from some water wells and hot and cold springs scattered across Arkansas. 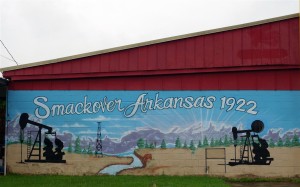 The brines of South Arkansas associated with the old Smackover formation, named after Smackover, the town, are some of the saltiest, even nastiest mineral filled brines in the states. These brines are now potentially going to produce lithium, a material sought after for batteries, chemical uses, even medical applications, and a factoid you might not be aware of. Lithium is used in the atomic bomb to increase the strength of the nuclear explosion.

Classified as a mineral, it is often associated with the “rare earth” minerals, although technically not a true rare earth. Lithium is thinly distributed and rarely in any concentrated form, and in fact, is very common, but widely distributed in such minute amounts it cannot be economically mined.

As society pushes headlong into a “fossil free” future without a clear alternative nor concern for the unintended consequences of such, lithium is going to be very important, especially if it finds an application is storage batteries that can store solar and wind power for a time when we need same. This would be applicable to our base load of electricity which is now supplied primarily by coal and natural gas and somewhat with nuclear power.

For the mineral owner mining for lithium and other minerals may be a future source of income especially from the densest of brines containing trace minerals like lithium, boron, and bromide minerals.