Investopedia defines “Barrel of Oil Equivalent (BOE) as the amount of energy that is equivalent to the amount of energy found in a barrel of crude oil. There are 42 gallons in one barrel of oil, which will contain approximately 5.8 million British Thermal Units (MBtus) or 1,700 kilowatt hours (kWh). (The use of BBOE is the same with the double “B” indicating the plural of barrel.)
So when I read a pronouncement that a company has wells that are capable of making 1 MMBOE, what does that mean? It means they say the well will make 1,000,000 barrels of oil…equivalent.
So what is equivalency? Equal to what? It means that the combined oil and gas in the well should be equal to the energy in 1,000,000 barrels of oil. The key word is “should”. In fact, the well might not produce a shingle barrel of oil. We could convert all the natural gas and natural gas liquids into “oil” metrics.
Natural gas contains about the same amount of energy in a 5,800 – 6,000 CFG (cubic feet of gas) as one barrel of oil. It actually varies according to gas quality. And “liquids” (ethane, propane, etc.) generally enhance the energy levels. So a typical metric suggests using 5,800. So you can see that a well of pure natural gas has the same energy as if the well produced about 172,000 barrels of oil.
So when a company claims that they have a 1 MMBOE well, it is going to be partly oil, partly gas, And if it was 100% methane, then it is the same as saying the well will make 5.8 BCF (billion cubic feet) of gas. Gas is sold in 1,000 cu. ft. (MCF) units. Currently a lot of gas is sold for under $2, but for argument sake let’s say $2. And oil (as bad as it seems) is selling for ~$35 a barrel.
There is something wrong with that picture. Do you see it? The ratio by energy or BTU content between oil and gas is 5.8 , let’s say 6. 6 MCF = 1 BO. But if we multiply $2 by 6 we get only $12. Oil should sell for $12 a barrel…a third its actual price. Natural gas is badly undervalued and has been for the past decade with the advent of horizontal drilling.
So you think your 1 MMBOE well is worth $35/bbl x 1,000,000 or $35,000,000. But if the well is 50% gas and 50% oil, think again. Yes, 500,000 oil barrels are valued at $17,500,000 but the gas equivalency is 500,000 barrels of oil, and 500,000 x 6,000 or 3 BCF, and that is $2 x 3,000,000 or $6,000,000.
The duplicity is in the disconnect between the ratio of prices for oil and gas, and the actual percentage of oil and gas in a given well. Your $35,000,000 well may be only $23,500,000 if 50% of the production is gas, and if all gas, it would be a mere $12,000,000…which is less than the find cost, drilling cost, and production cost of a well in most of the deeper basins. One more hint. Most wells in these shale plays are making less than 50% oil but are often called “oil wells” when they are producing both gas and oil.
Perhaps next time we will talk about the cost of disposing of waste water from wells, the giant elephant in the Shale room. 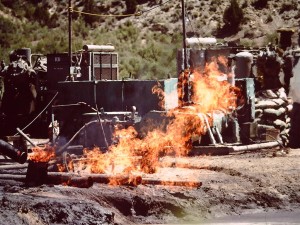 When is too low really “too low”?
With predictions that oil may go to $20, there is a real question if the oil companies are suicidal or not. When the typical stripper well costs $20 – 30 a bbl. to simply pump, maintain, and operate, how long can you sell oil for less than you spend selling it? The short answer is that you can’t. You must shut the well in and turn off the pumps.
The danger of doing that is that these horizontal wells apparently have some problem restoring production if they are shut in for long. Many may require a workover operation to restore them to operating condition, if they are shut in for more than a few days. But companies cannot burn cash and should not throw good money after bad. They are better off to simply shut in a well. And that is going to be the function of U. S. producers. The Saudis cost of lifting is far below that of the average shale well or stripper well in the U. S. so they can go as low as $10 a barrel and still generate a positive cash flow.
The average stripper well is marginal and usually operated by smaller companies who specialize in stripper production. They are often mom and pop operations. Lifting costs vary but with electric bills that can be as high as $2,000 per month and “pumpers” managing the wells costing another $1,000, you quickly see that a 10 bbl. stripper wells (300 barrels/month) costs $10 merely to lift the old, and out of the production, the royalty owner is owed from 12.5% to 20% of the oil. Add to the costs, maintenance and parts, bookkeeping, transportation, and other costs and $20 a barrel is not going to yield a profit. And the solution to buying watermelons for $1 and selling them for $1 isn’t to go buy a bigger truck. The well has to be shut in. When low oil prices were the norm from 1994 to 2003, over 140,000 stripper wells were shut in, or plugged and abandoned. Failure to produce for one year means the wells will revert to the royalty owner and the state requires the wells to be properly plugged with cement. I will stick my neck out and say we won’t see oil hit $20 per barrel. But if the states do not step in and impose pro-rationing and slash production, then we will do serious, permanent harm to any notion of “energy independence” for the next generation. We certainly cannot expect congress to impose a sliding tariff on Saudi oil which would put an end to this nonsense overnight. Once the dust settles, the world producers will have adopted horizontal technology and in doing so, will be the low cost producer of the future, leaving the U. S. production to only be profitable when oil prices are at extreme high prices. 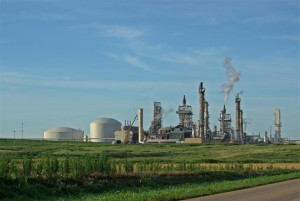