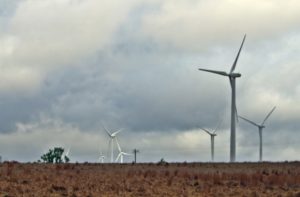 Today it is argued that the fossil fuel industry is “dirty”. Perhaps but all energy sources will be extracted from the earth or those extracted from the sun will rely heavily upon materials that are mined, such as lithium and silica. Construction requires the use of heavy machinery, almost all of which is fueled by diesel or gasoline engines.

Wind power depends upon wind generators- the giant bird chopping eco-crucifix that dots the prairies of America. These are constructed of oil based plastics and huge amounts of energy are required to mine the sand, gravel, and lime that constitutes the enormous concrete bases necessary to hold up a large wind mill. The giant fiberglass blades are necessarily replaced regularly because abrasives in the air will chew the leading edge of the blades to pieces. It is similar to the edge of airplane wings and noses which often have little paint left after being in service for some time. The result is the claims of 40 year life of a wind generator is more likely going to require substantial maintenance long before the 40th year.

Geothermal energy likewise is consuming the heat found within the earth either on a small scale geothermal heat pump that heats a house, or as a steam driven turbine generator. Construction costs consumes a lot of oil and gas with mechanized equipment, from drilling the wells to constructing the facility, energy inputs are primarily from fossil fuel sources.

Atomic energy requires the mining of uranium ores, and again, large costs to construct the atomic power plant. Atomic energy is out of favor but remains the most efficient, carbon free source of energy available.

Solar energy is another source where 40 year lives are touted but for the most part, financing is limited to only 20 years and for a reason. By the 20th year the solar panels have lost substantial ability to put out 100% of the potential energy that they started with. And what do you do with those panels after they stop producing? Disposal means going into a class 4 landfill. It is cheaper to dump photovoltaics in landfills than to salvage the lithium in the panels.

Again, all sources of energy will require energy inputs and much of that energy input will still come from electricity generated by coal and natural gas or from gasoline/diesel powered machinery. No one has invented an all electric bulldozer yet.