Once again, I endure listening to CNBC talking heads who don’t know their butt from a hole in the ground about drilling, fracking OR earthquakes, trying to explain to people about something they have nary a clue. It makes me want to rip my XM radio out of the dash and throw out the window. To wit, they were arguing yesterday (April 12, 2016) that fracking was polluting water; fracking was causing earthquakes in Oklahoma and thus, the oil industry was causing people to get sick from drinking water and quakes were allowing the contamination. Say what?
That is all pure idiotic nonsense. You don’t have to be an earth scientist or engineer to understand the basics of fracking nor do you need a post-graduate degree in Seismology. So once again to explain the basics, I will tell you a few plain facts.
First, Fracking occurs deep in the production zone. It does not frack into the formations above and below the zone of interest. “Fracking” should not be confused with “drilling” – the process of drilling a hole into the ground. Fracking is ONLY the process of opening the fractures under high pressure and injecting tiny sand grains or man-made pellets of sand into the formation, which props open the induced and natural fractures to allow more gas and oil to enter the borehole. Fracking never goes into the shallow groundwater under normal circumstance.
Almost all pollution on the surface relates to a failed casing near the surface, or a failed pipeline between the well and the transmission line. This is typically the vertical section of the casing or is a surface casing. Fracked wells are usually horizontal drilled holes at depth.
FRACKING does not cause earthquakes. The induced seismicity being experienced in Oklahoma relates to the DISPOSAL of waste water in vertical INJECTION wells. Those wells are basically on vacuum. They simply dump water into the borehole and that water enters the formation only under the hydrostatic head of the column of water.
Oklahoma has always been subjected to earthquakes. About 1,200 of them occurred in the state between 1977 and 1998. Thus, geologically Oklahoma is a setting where the rocks are already in a state of being susceptible to outside influences. Deep injection has been the trigger that has lubricated the formations.
Important to understand is that most of the fracking is occurring in rocks of the Mississippian Age (about 300-360 million yr. before present), and the oil from those rocks tend to have a lot of water. Produced water, on the other hand, is water from all sources – produced from drilling from vertical or horizontal drilling and is being injected back into rocks that are older and deeper – namely a generic formation known as the “Arbuckle” (which is Ordovician in age (400-450 million years old.) The water used for fracking is often recycled and is not related to the produced water after a well is drilled. The problem is the produced water not the water used during the fracking process. The older rocks are fractured (faulted) differently from the Mississippian above, and they are susceptible to movement. Thus, the high water cut is flooding the Arbuckle dolomites with too much water and lubricating these large blocks of carbonate allowing movement.
In parts of Oklahoma where the rocks are not producing so much water, there has been little, if any, seismic activity. It is only in the Mississippian play, where lots of water is being moved, and injection into the Arbuckle formations below the gas and oil zones is where earthquakes are a problem.
In areas like Grady County to the southwest of Oklahoma City, there is much less water to deal with, thus less injection is necessary, and that disposal is into formations above the Arbuckle. Earthquakes are not occurring in those areas.
Fracking does not impact surface water quality, nor does injection or earthquakes impact the surface or drinking water quality. The quakes are a serious problem for homeowners in the Mississippian play area and that issue needs addressed. Stopping fracking isn’t the issue. And CNBC and other talking (empty) heads need to shut up or bone up on subjects they pretend to be knowledgeable.

The 900 # gorilla in the room for Oklahoma is the earthquake problem. Many geologists are making the case that shallow injection has not been an issue. Nor has fracking itself cause earthquakes. But injection, although on vacuum and not applying any over-pressures, into deep Arbuckle formations are a source of seismic activity.

The state has forced even the shallow injection wells to cut injection rates. But if the deep zones are the issue, then why? Further, a lot of wells are moving a lot of water, that is particularly true in the Mississippian formations. There the oil may be only 5% of the produced fluids. The rest is salt water that must be re-injected into the depths. Therein lies the problem. In areas of low water cut, injection rates are limited but the areas with Mississippian production, and high water cuts, is the clear culprit in triggering the quakes.

Those quakes are in a formation that has a propensity to earthquakes, but injection has only put them on steroids. The solution isn’t in sight. And companies with desperate need to maximize production are making it worse. Devon, in particular, is in the area and have the deepest pockets. SandRidge is broke and will almost certainly will go away. So the inevitable lawsuits will target Devon. You cannot get blood out of the SandRidge turnip. 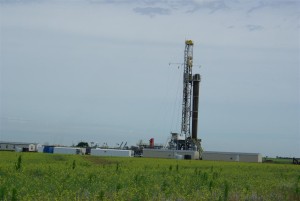