In the mid-1980’s, having survived the slower 1981-82 downturn, and watching Iran and Iraq duke it out, the oil business was in limbo over $20-25 a barrel oil. But once Iran and Iraq agreed to stop because they were hurting themselves, everyone thought these companies would have little incentive to continue dumping supply on the market. They were wrong. Combined with the increased output of the U. S. itself, the Saudi’s share of the market was minuscule. And they decided to end it. They opened the tap and drove oil prices below $10 a barrel. Now, they have done it again and no one seems to know how to put that Genie back in the bottle.

The mistake the oil companies made in the 1985-87 time frame was to savage their own technical staffs. The few geologists and engineers retained were often either the senior geologists who would soon retire, or, very junior staff that they viewed as their future. The interior was hollowed out. Geologists between 30 and 50 were basically out of work and completely out of the oil patch. A few survived in the business by switching to the new computerized systems and I know a couple who basically were warehousing company data on antiquated IBM computer systems. Probably much of that data is permanently lost or not accessible without serious investment in retro computer systems. Core data, well logs, and particularly seismic data were wasted.

Why did they make that mistake? Because the consensus was that there was a glut of oil, a thirty year supply. The oil business was going to be in for a very long ride. In fact, it was historically long in large measure due to all that drilling done in the 1970s and early 1980s. But less than 15 years later, in the late 1990s, the domestic reserves were rapidly falling. This “legacy” oil is still falling because most of the new production of the last 10-15 years is from “unconventional” oil. I don’t like the term unconventional because it is misused. Let me digress briefly.

Wells can be drilled vertically and prior to 2005 or so, the vast majority of wells were vertical. But horizontal wells have been drilled since the early days and offshore platforms used the technique for decades. There is nothing unconventional about a mere horizontal well. That is not to say the technology has not improved with better downhole bits and turbines or better steering technology. And many new rigs were created with technology especially for horizontal drilling. But divorce yourself from the idea that a horizontal well is “unconventional.”

Therefore when a well is drilled into a conventional formation, horizontal or vertical, there is no reason to see this as new technology, just as improved engineering and materials. The differentiating factor in whether the technology is “unconventional” or “conventional” is the nature of the reservoir. Unconventional oil and gas is produced by shale formation – what we old-time geologists considered only in terms of being a source rock. A source rock is where gas and oil comes from and migrates to a trapping mechanism in a more porous formation.

Today the oil companies once again are buying the idea that there has been a thirty year glut created. I doubt it. I think prices will be up within five years to near new highs. The trigger is that once U. S. production falls, OPEC once again establishes its dominance and it will be under pressure from member states like Iran to ramp up production and prices. And characteristically, U. S. shale drillers will want to ramp up as well.

Problem. The oil companies are burning their bridges with massive layoffs that they cannot avoid even if they recognize the folly of getting rid of the best engineers and geologists in the world. They are burning cash and must cut all expenses. And they will need to rehire expertise and need money to drill. Who is going to provide that? The banks are being burned. By that I mean both conventional banks and “dark money” banks, hedge funds, investors, etc. Some of them are in serious trouble over loans and with dozens of bankrupt companies making the banks more wary of lending, where will that cash come from?

Internal funding from production is the only available source and the high cost of drilling along with the risk of drilling means a rebound in oil and gas drilling in the U. S. will be anemic by comparison. It will mirror the 2000 – 2005 years when drilling ramped up very slowly.

Finally, in the 1973-1983 period over 4900 rigs were operating. Approximately two million people lost their jobs by 1987. About 500 rigs were running at the nadir. This downturn, the maximum rig count was less than half that of the earlier boom. Today, we barely have 400 rigs running and job losses total about one million. The next boom will come and probably will end in another bust. But if history is a teacher, then we can expect no more than as few as one thousand drilling rigs to operate at the peak of that boom.

The average Joe does not understand why they pay only $1.40 for gas this year but three years later are paying $5. But there seems to be no end to the cyclical nature of this business for the foreseeable future. 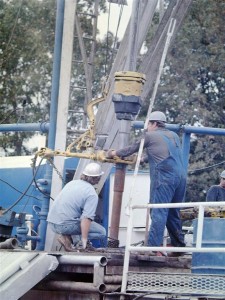 Ruffnecks make a connection (add pipe) on an air drilled well in the Arkoma, circa 1980s