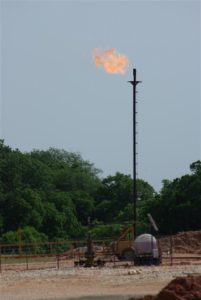 Gas flaring is being allowed and mineral owners should be up in arms over it.  Proponents declare the oil couldn’t be produced and the explorers would go bankrupt if unable to get that pesky gas out of the way by simply burning it off to get at the oil.  Producers have only themselves to blame if they go broke, because from the getgo they have “went for broke” paying extremely high bonuses, offering high royalties, and spending insane amounts of money to drill expensive holes in the ground.

Once they have drilled those holes, then what happens?  They think of every way possible to swindle the mineral owner out of their share of the proceeds with post-production expenses that exceed what any “prudent” operator would pay.  Worse perhaps, they flare off the gas with the claim, if they didn’t they could not get the oil which they need to sell to pay the bills.  Not my problem.  Then they argue that the price of natural gas in places like West Texas is a mere $0.01 or even a negative number as glutted gas pipelines don’t need the gas. They have plenty, in fact, way more than plenty for the foreseeable decades.

It is too expensive, they claim, to re-inject the gas back into the reservoir it came out of. Really?  This is the part that mineral owners may not understand.  When you flare that gas, the reservoir pressure is reduced. If you re-inject that gas into the reservoir, pressure is maintained.  Why is that important?  Any formation will give up only a certain percentage of its oil and gas.  In some formations, like the San Andres in West Texas (which happens to be the most prolific of all West Texas formations) only 30% or so of oil is produced by primary means. Secondary and tertiary recovery can increase that percentage but nothing is going to give up 100% of the oil.  Tertiary recovery using CO2 (yes, carbon dioxide pumped from Colorado) re-pressures these old fields and help scavenge the smaller oil droplets into the well bore.  But it still won’t get 100% of the oil.

Why do they need to do that?  The initial older wells in the Permian Basin were open flowed, producing a maximum of oil and simply wasting the gas. That gas provided the pressures in the reservoirs to drive the oil to a borehole.  Once the gas depleted and met the bubble point.  What is the bubble point? It is the pressure / temperature point where the gas comes out of solution, as it is entrained in the liquid oil and provides the pressure to get the product to the borehole.  Schlumberger’s glossary of oil terms goes on to say,

“the oil is saturated with gas when discovered, meaning that the oil is holding all the gas it can at the reservoir temperature and pressure, and that it is at its bubble point. Occasionally, the oil will be under-saturated. In this case, as the pressure is lowered, the pressure at which the first gas begins to evolve from the oil is defined as the bubble point.”

Burning off the gas means two things. The mineral owner will not get adequately compensated for a valuable commodity, natural gas. Secondly, it means the well will make LESS OIL.  Simple fact. The well will go on pump and into secondary and tertiary recovery much sooner.  Once you’ve lost that pressure it is much harder to re-pressure the formations.  So the company isn’t just wasting gas, but wasting oil in a short term effort to cash flow so they can drill some more loser wells.  And many of these wells are losers. They will never pay out, but in the process of trying, they will damage the reservoir and ultimately cost the mineral owners most of the value of the mineral right.

The solution is to forbid all flaring….all of it. Nada. No. None. Negative. Mineral owners should be howling at every Texas Railroad Commission hearing (and same for Oklahoma and the Corporation Commission) to ban the practice and force not only that natural gas be re-injected into the formations, but proration needs to be imposed. Why?  Those two acts would do more to restore sanity to a business being run by hedge fund bozos who have nary an inkling what they are doing.

An old gray haired geologist told me recently that when meeting the head geologist of one company, he was astounded at the lack of basic knowledge demonstrated by the man. He lacked the most basic knowledge of the industry, which is a reflection upon the people who hired him. They knew no more than their head geologist so neither of them had a fundamental understanding of the geology.  Yet they were throwing tons of money at wells in hot areas simply because…well, everyone said that was a hot area. No more reason than that. These companies need to go under. And mineral owners need to be at every commission hearing and raise bloody L to the regulators to impose proration and ban ALL flaring after the initial test period of a few days.