Geothermal energy is the poor stepchild of low carbon footprint “alternative energy”. Why? Well, I suspect the fact it involves an actual drilling rig common to the oil patch has something to do with the ocular vision of those who prefer raptor killing windmills or expensive short lived solar panels.
Geothermal involves a passive method where a hole is drilled, and a U tube of pipe is sent to the bottom drawing the warmth or coolness of the earth to operate a heat pump at the surface. In residential installations, this may involve a few 200’ deep boreholes and the U tube of plastic is enclosed in bentonite (swelling) clay. It works very well to reduce energy usage in a dwelling. But as a large scale operation, it is not so hot…bad pun.
The Geysers in California is virtually the only U. S. based industrial scale operation where hot steam water is used to generate steam and run turbines for electricity. Nevada and Utah do have some geothermal power plants. In Iceland, this method produces almost all the energy and heating for the island nation.
Iceland has been working on a well that is approaching 5,000 meters (over 15,000’) depths and has penetrated rocks that are extremely hot. A similar effort failed a few years ago when it actually broke through and into a magma chamber resulting in the blowout from hell. It destroyed the drilling rig. This effort will attempt to use the borehole to boil water and run a turbine capable of 10x the energy of a regular steam well found on the volcanic rocks of Iceland. This will involve supercritical hydrothermal fluids as an energy source. Pix from Renewable Energy World. 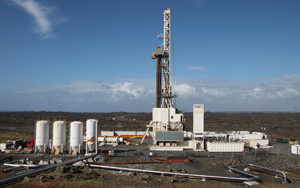 Is there potential here? Yes, but there is also the potential that horizontal drilling could create an even better system. That could involve a horizontal well that could intercept a vertical hole creating a natural loop, and pumping water in the hole and taking steam out the other surface hole. Where do we have high temperatures (over 212° F.) The map below shows that most of the West has potential and much of the Texas Gulf Coast. The Ouachita Mtns of Arkansas also have deep high temperatures.
The potential for development of geothermal energy is very high. Map from SMU.

Protesters in Fayetteville, AR are protesting the Diamond pipeline project that will take oil from Cushing, OK to a refinery in Memphis, TN. One protester claimed to have quit his job here in Arkansas, then gone to N. Dakota to protest at the DAPL site and then returned here to protest the Diamond pipeline. I suppose he rode a horse, right? Probably not. A nice comfortable air conditioned car? Or, maybe like a protester claiming he didn’t need oil, he rode the bus. How big a hypocrite can you be? Apparently you can be supersized when it comes to moronic statements and actions.
One argument supposedly given to the press when it was first reported in late November by a local news station was that the pipeline threatened water quality, contributed to global warming, and created earthquakes. So we have some new science now. Pipelines cause earthquakes. Man, that’s going to be news to government and science alike.
What do the protesters propose? They will have a candle vigil on Dickson Street. Nice. Candles made from a hydrocarbon undoubtedly. Protesting while wearing Dacron coats and holding plastic placards. The snowflake generation is upon us. Short sighted environmental stupidity that hurts the environment not helps it. We will waste a lot more fuel than the fool above who drove to the Dakotas and back sending oil by rail car or barge, and do so with a much higher chance of an oil spill.
The environmental movement is stunned as Lincoln put it, “like a duck hit in the head by a stick”, with the loss of the Democrats and the subsequent election of a businessman who clearly understands that oil is a vital part of the economy, that global warming is a scam and hoax to sell the carbon tax to the public, and regulations are holding up important project across this nation. But don’t expect the greenies to take this lying down. They will shake off the blow and redouble their efforts in the future.
Sadly, today we can safely say 3 of 4 Americans are equally ignorant of science and engineering. They have no idea where oil actually comes from or how many products are made from it. Nor, do they understand that “alternative” energy is a long way from supplying a significant part of our energy needs. Fossil fuels shall remain the mainstay of this nation. And pipelines are the best way to transport liquid fuels. The occasional accident is the price you pay for central heat and air, good automobiles, those plastic bottles we get everything in, from water to medications.