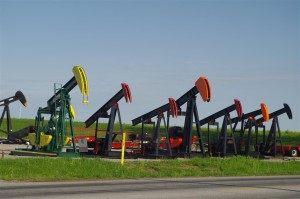 There is a weird but fundamental relationship between politics and oil. The Democrats hate oil and believe that it should basically be eliminated permanently in favor of ‘green’ energy (whatever that is.) The Republicans promote the oil business as necessary and vital to the economy. Yet the industry often benefits from Democratic policies while Republican policies often end up creating a glut of oil that spells doom to many companies and drives down the price of oil and gas.

In the 1950s Eisenhower argued that if we bought cheap oil from the Middle East we could curry favor from them while conserving our own reserves. Oil had gotten relatively expensive after WWII as the economy boomed. But by 1960, oil prices were in the tank, drilling in the US couldn’t complete with cheap Arabian oil. But the Arabs realized they were being screwed and formed OPEC. It was Nixon who would support the Israelis in a war with Arab nations that resulted in that cheap oil being embargoed. OPEC suddenly became a world power.

While oil prices were getting higher, US production had lagged substantially. Natural gas was in short supply and the boom in drilling was natural gas oriented about 1973, when yours truly started in the business on a deep Exxon test in West Virginia known as the Tango prospect. Drilling for oil was beginning to revive. But prices were still below $10/barrel. When Jimmy Carter, a Democrat, came into office he was instrumental is creating a two-tiered system. The “old oil” was capped at prices of less than $3 per barrel while “new oil” – recently discovered oil, could achieve up to world prices which Carter couldn’t control.

What he didn’t realize was that such a system was not a ceiling on the price of oil, rather a floor from which OPEC was able to continually raise prices. The ultimate result was rising prices. With the Iranian crisis, suddenly Iran’s oil was not welcome in America, kicking off a huge boom in drilling stateside. And it was successful in putting a lot of people to work, bolstering the price of “new oil”, and raising the reserves of US oil to the point that OPEC was getting a smaller bite of our apple. That resulted in pressure and conflict between OPEC nations. Iraq and Iran, in particular, wanted high prices and a high quota to sell, but were unwilling to recognize their cheese had gotten moved.

Ronald Reagan began his presidency by trying to reduce taxes. This meant the tax rate was lower. Many wealthy people bought into drilling funds knowing that they were going to lose 50% or more of that money to taxes if they didn’t invest it. And drilling funds offered the chance to defer any such loss. If the well was successful, they made even more money and paid that tax the following year, or if unsuccessful then the money spent was not taxed away. At least they had a chance to recoup some portion of the tax monies they would have coughed up.

In less than one year, as Reagan opened up drilling on federal lands, reduced taxes and stopped the silly old oil/new oil 2 tiered system, suddenly the rug was pulled from under the bloated oil business. Prices fell, rigs were laid down, and no one wanted to invest in those tax sheltering “drilling funds.” Drilling fell to a more normalized level, risk was re-introduced into exploration, and this rocked along for a while. Meanwhile Iran and Iraq degenerated into a shooting war.

That war matters. Because both depended upon financing it with oil and they keep exceeding their quotas at OPEC. The Saudi Arabian government had finally had enough. They opened the spigot in 1986 and dumped oil on the market. It drove the price of oil down to $8 or less. That wiped out US producers who could not compete at that price. And suddenly Iran and Iraq saw their incomes fall to a trickle. They sued for peace, an uneasy one, but nevertheless the Iran-Iraq War was over. But the problems remained.

Iraq’s Saddam needed money. He had borrowed money from Kuwait and in 1991 he invaded Kuwait thinking no one would care. He would simply steal the money he wanted. Republican George Bush drew a line in the sand and the Iraqis were driven from Kuwait. Oil prices collapsed once again. Geopolitics at work.

It was about this time that the Global Warming scam started. Alarm spread after Saddam torched the Kuwaiti fields. The “Nuclear Winter” scenario was bandied about and in the end, was a nothing burger. The climate didn’t change and the world didn’t fall into a mini-ice age. But it spawned the seeds of the Clinton Administration taking serious notice of the Chicken Little’s of the nation and Al Gore became a spokesman for the “We’ll all die if we see 400 ppm of CO2″…which we saw and we didn’t die.

At the very end of Clinton’s reign, oil prices actually did spike for a time, but at one point, gasoline prices were back below a dollar. As Bush took office and once again a shortage was looming, both in refinable oils and natural gas, a new technology was brewing. And the shortage of oil meant not only that we were importing a huge percentage of oil from OPEC and paying increasingly high premiums for it, but vertical drilling wasn’t supplying much domestically.

Meanwhile gas drilling was increasing using horizontal drilling and fracking. No one thought it would work for oil drilling however. But the high prices and the sudden change in the US economy with the housing crisis led to a collapse of oil prices in August 2008. US drilling was beginning to hurt OPEC and the Saudis attempted the same ploy they used in 1986, they opened the spigot attempting to stamp out the US competition. It didn’t work this time.

But it was increasingly obvious that oil could also be gained by horizontal drilling even though this frequently meant producing a lot of associated gas. This meant we continued to buy less oil from OPEC and rely upon our own production. The very light “liquids” could be blended with heavy tar sands from Canada and produce a blended medium weight crude oil. As the economy recovered from the housing crisis, prices continued to hold steady late into Obama’s administration, despite their effort to thwart oil production and promote ‘alternative’ energy. Trump came in perfectly happy with low oil prices that got the economy kick started and the first three years of his administration were a remarkable boom. If Covid had not hit, then he would have almost certainly seen a huge economic benefit to low oil prices.

The punch line is now Biden is the president and wanted to convert cars to electric, etc. etc. He had stopped permitting, etc. Well, the oil price is low. The natural gas prices are incredibly low. If the Biden administration slows permitting and leasing on Federal land and stops the flaring of natural gas, then almost certainly we will very quickly be importing oil from countries who will raise the price of crude oil quickly. And that is going to be the best thing to happen to the oil business in 12 years. High prices means more profit. And nothing proposed by Biden will replace the necessity of oil and gas to heat our homes, generate our electricity nor run our tractors, trucks and automobiles. It is also apparent that despite not having a full recovery in gasoline demand, the price of gasoline has already risen significantly since Biden’s election and oil prices are up by 20% in some cases.