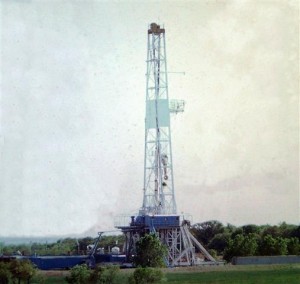 a rig abandoned in 1982 and remained there for 3 years or more. (poor quality slide)”

My friends with OKT Resources, out of Edmond, Oklahoma made a prediction that I have thought about and agree with. Namely, there were 4,900 drilling rigs in 1981. We got down to some 700 or less rigs by 1999. Where were the rest? Scrap metal or parts for salvage. Was it the worse rigs that were taken out of commission? No. It was the largest and best in the fleet. Why? Because they cost too much to run in a $24/bbl. environment that was the norm from the early 1980s into the late 90s. The Cadillac rigs were simply too expensive to run and no one wanted to drill 20,000’ deep wells many of the larger rigs were designed for.

Today, the crush of oil prices means that the only investments to be made in drilling will be shallow, cheap prospects for traditional intermediate and heavy oils. These are the kinds of oils that our refiners are capable of handling. The reason the Canadian tar sands oils are attractive is that they are very heavy and when blended with the very light crude oils that come from places like the Bakken and are almost all of what horizontal drilling produces, it creates a blend that the refiners can run.

The very lightest oils are selling for half that of the posted oil prices. There simply is too much of it and we cannot export it. But this stuff is what many other countries have and can benefit from that “crack spread” – the increased profit margin when a crude blend is optimized for the refiner and thus maximizes the income from cracking the crude into refined products. So we need to be able to export these light oils.

But today, many of the “legacy” rigs that were designed to drill vertical holes have been moth-balled. The demand for rigs that are specifically designed to drill horizontal holes has boomed since 2006. And thus, over half the fleet of rigs are rapid deployed, computerized, and above all, expensive. They are expensive to build, expensive to maintain, and expensive to run. But with the new low price of oil, the only projects that will be funded are low-cost, shallow conventional oil prospects. They don’t require expensive rigs, in fact, will not hire them. Or, as my friend at OKT explained, “Looking for a rig, the drilling contractor asked me if I wanted a top line rig and I said no, and the owner said he had 20 rigs running this time last year and had only one rig drilling today.”

During the 1980s bust, a few rigs remained in place with the roughnecks simply walking away when their employer filed bankruptcy. Expect a few more such “Ghost Ships of Oil” to dot the landscape of the “unconventional” plays.

There isn’t going to be any demand for many of these top notch rigs. They are going to get old and the ones they cannot keep busy will end up in the scrap pile or cannibalized for parts just like their counterparts from 1981. You will see much less horizontal drilling over the next couple of years. Footage-wise, the 4900 rigs of 1981 were probably drilling no more hole than were the 1,900 rigs running in mid-2014. But the cost per foot is much higher today. If oil goes much below $38, then you surely see the problem. Oil was $24 a barrel in 1984 before the Saudi’s drove the price to the wall – down to $8/bbl. That forced the Iranian and Iraqi governments to end a war between themselves, and set Saddam on a path of looking for money by shaking down Kuwait. So do you think low oil prices did anything but destabilize the Middle East? What consequences will this downturn have on world peace?

Finally, the joke in the oil patch in mid-1980s was that the out of work geologist was at his wit’s end so he went to McDonalds and applied for a job. They said, “Sorry, all our geologists have master’s degrees.” That joke isn’t going to be very funny for a lot of folks real soon.

PS – The new generation of geologists are experts at geo-steering and shale oil environments. But they have very little expertise or experience in prospecting for conventional plays. Can they adapt?